Home › Bike Culture › Am I The Problem?

Am I The Problem?

There’s a school of thought that if, as a driver, you constantly find cyclists are angry at you, then you’re probably a terrible driver.

Over the last six months though, I’ve been starting to wonder if this doesn’t cut both ways. As a result of the road works on the Coast Road & Beach Road, I’ve got a new route to work, going through Battle Hill on a 30mph distributor road that has frequent traffic islands. I’ve had one of those continual runs in which pretty much every week I fear for my life on the road. Constant cases of close passes (often at speed), drivers overtaking on the approach to, or actually on blind bends, drivers cutting in at traffic islands, drivers remonstrating with me about how much of the road I want (clue: when passing those traffic islands, it’s 100%), and yesterday a shouty driver who got out of the car to get even more shouty.

Just as an aside, some anecdotal observations on the demographics involved:

I’ve tried to find solutions to all this. First of all, I implemented the “Give Me Some Flippin’ Space Stick”. It’s a PVC pipe wrapped in duck tape & hi-vis attached to the pannier rack via a prop-stand. This means I can fold it to vertical when cycling on shared paths etc, but once in traffic, it sticks out at about the minimum safe distance I’d ever want anyone to come when overtaking: 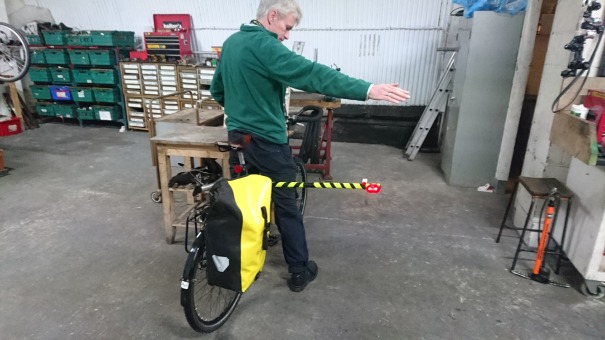 It was actually hugely effective, and I found myself basically riding in secondary position, even in situations where my brain would usually be screaming “TAKE THE LANE” at me. Then one evening in November, I met a white van man who obviously thought I was getting above myself and so deliberately drove along side me and swung into the stick. It bent the prop stand, I gave chase, got his number and reported it to the police. I spent nearly two hours giving a statement, and in the intervening four months have heard NOTHING.

I also don’t really like The Stick – another cyclist I passed commented that it was a bit provocative, and I can’t help feeling that he’s not wrong.

So I decided that if the stick wasn’t working, I should get myself a pair of cameras (£65 each. Oh, and the bracket on one snapped and the camera was lost, so that’s £195 in total). Most of the incidents I’m part of are close passes, and most of these are not close enough to actually cause me to lose control of my bowels. So I just hold them up for public ridicule, like this:

If you’re driving a taxi, chances are that I WILL report you to the licensing authority. If it’s North Tyneside Council, they’ll drag the driver in pretty promptly to remind them that their taxi license can be revoked:

A couple of weeks ago I had two drivers overtake me even closer than any of these, within three minutes of each other. The video footage from these is with the police, so we’ll see what happens this time.

I’m also putting in a lot more road miles on the weekends this year. Sundays involve an ever increasing mileage that takes me off out into the countryside. Right now, these are four hour rides, but by the time June comes around, they’ll be more than six hours. With camera batteries lasting just 90 minutes or so, I don’t have footage of the kind of craziness I experience EVERY FLIPPIN’ TIME I go out on these rides.

Anyway, the upshot of all this is that I am genuinely starting to wonder if it’s ME, and not THEM that’s the problem. The solution is probably to get one of the many Bikeability instructors I know to come out on a rush hour ride with me, observe what I do & how I ride, and then give me either some “constructive feedback”, or the thumbs up.

Of course, there two alternative solutions:

a) UK local authorities – PLEASE segregate me from the Muppets that seem to get driving licenses nowadays. Or…

b) Even assuming we leave the EU, I’d still be able to emigrate to the Netherlands, right?